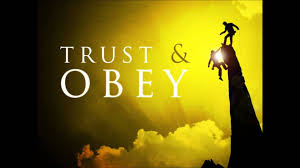 The hymn with the same title as today’s devotional goes in part like this, “Trust and obey For there’s no other way To be happy in Jesus But to trust and obey” Still musing on last Sunday’s sermon and especially Jonathan’s nameless armor bearer. Israel was at war with the Philistines again. The latter outnumbered the former in weapons, soldiers and chariots! Israel had only two swords for weapons in the hands of King Saul and Prince Jonathan. The warrior Prince decided to step out in faith and attack a Philistine garrison. He enlisted the help of his weaponless armor bearer, “… “Come, let’s go over to the outpost of those uncircumcised men. Perhaps the Lord will act in our behalf. Nothing can hinder the Lord from saving, whether by many or by few.”” 1 Samuel 14:6. Without hesitation, the armor bearer responded, “Do all that you have in mind,” his armor-bearer said. “Go ahead; I am with you heart and soul.” 1 Samuel 14:7 The guy trusted his master so much that he was willing to follow him and to serve him regardless of what it might cost him personally. He knew there was a possibility that they would lose their lives. A “perhaps the Lord will act on our behalf ” was not a good enough strategy to go to battle on. Yet he trusted Jonathan and obeyed his direction to go on what seemed like a boneheaded venture! Are we willing to put that much trust in God? What is God asking to to do that you have not done? What has He said in His word that you are struggling to obey? Has He placed someone on your heart to help? Are you busy calculating the cost while God is waiting for you to obey? It will cost you your comfort so you are balking, digging your heels in and refusing to heed the direction of the Lord. He was willing to make a sacrificial, devoted commitment to his master. God deserves nothing short of our full trust and complete obedience. He will never fail those who trust and obey Him.

Posted in AM Musings
← DiscernmentIt’s That Simple →